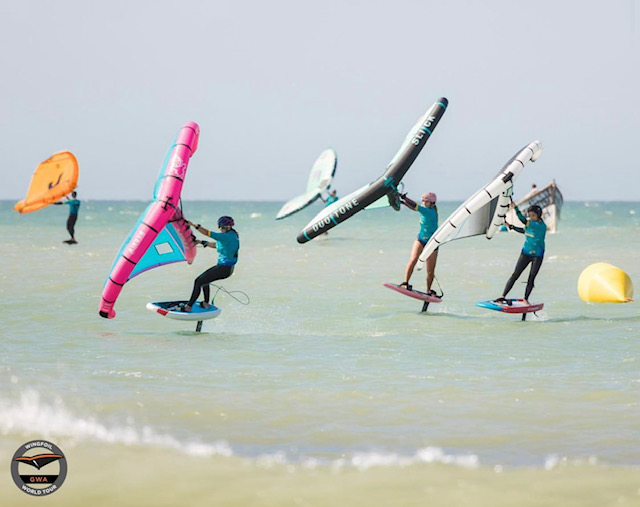 This will take a moment to sink in. Today, I will be completely honest, I was super nervous. After yesterday’s racing, Bowien van der Linden and I were tied dead even. Throughout the day, all the women’s racing skills improved, mine too. I made a few mistakes today, that actually I was proud of because they were mistakes I made because I was pushing it. It’s crazy, a little speed, a little motivation, a competitive field and it’s crazy what you can do. Super happy to take the win today! »

« Really, I’d like to say thank you to the @wingfoilworldtour and especially, @bowienvanderlinden, @orane.ceris, @paulanovotna & @marcelawitt for opening the door to what is possible for women in Wing Foiling surfing & Racing. This is just the beginning. I’m excited and I am super excited to see how far Wing Foiling can go! There’s no limit between here in the sky, let’s keep pushing and having fun! This sport is next level!

« Can’t believe that I made another podium with 3rd place at the race discipline here in Dakhla! Overall, I finished some heats in third place and I even managed to win one at the end. Now, I managed to understand my weaknesses and I will work on them for the next step in Brazil! »